Yaboku (by Father and The Stray)

Yato (, Yato), also known by his given name, Yaboku (, Yaboku), is one of the main three protagonists of Noragami. He is an obscure god who aims to become a God of Fortune.[1] In the past, he was known as a God of Calamity.[2]

Yato appears to be a young man in his late teens to early twenties with a height of 173cm (5’7”).[citation needed] He has messy, dark black hair and light blue eyes with small, round pupils that become narrow when he is serious or angry, resembling that of a cat's.

Yato is often seen wearing a navy tracksuit that has a small golden crown on the right side and a pair of brown boots. He wears a faded blue scarf with tears around his neck.

In the flashbacks, he is seen with a ponytail and wears a dark-colored man's kimono.

When imagining himself becoming the wealthiest God, he has a large red cape, a crown, and holds a pink hand fan. 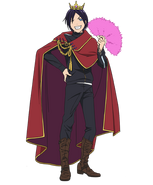 Yato imagines himself as the wealthiest God

Yato can be mischievous, crude, and unpredictable in his behavior. At times, he is rather childish or gullible. He often indulges in fantasies of becoming a supremely successful god, with a large, luxurious shrine and many miko fawning over him.[3]

Yato is quite tight with his money, wanting to complete any and all of his jobs so that he wouldn't have to refund his clients[citation needed] and even feeling temptation to sell his shinki when presented with a large offer.[4] However, despite his grand aspirations, he decidedly charges only 5 yen per job,[5] which is the standard offering at shrines. He also spends his money on drinking, gambling, and good luck trinkets.[citation needed] According to Yukine, it is rare that Yato would spend his money to make someone else happy.[citation needed]

Despite his seemingly carefree personality, Yato can be very serious when the situation requires it. He has a complex moral code. He has shown himself to believe in harsh and risky teaching methods, demonstrated by his handling of Manabu's bullying situation[6] and Yukine's first ablution.[7] He believes gods to be unable to do wrong[8][9] and has low tolerance for people who he views as weak-spirited[3] or who want to commit suicide.[10] However, he also demonstrates an underlying sense of compassion; for example, empathizing with Yukine's situation[7] and wanting to raise him up,[11] or not wanting shinki to witness a human give up a chance at life.[10]

Yato has shown great determination and perseverance in pursuit of his goals, spending centuries trying to become a more popular god and break away from his past with his Father and The Stray. Because of this desire, Yato is very secretive concerning the details of his past, though he doesn't attempt to lie when confronted with it.[12]

Although Yato was taught to think that killing was a game by Father, he has consistently shown concern for people's wishes and well-being, even before seeing Sakura's horror at what he considered a "game."[13][14] Under Sakura's gentle guidance, he became more reluctant to murder, regretting being involved in killing jobs tasked by his father and wants to cut himself off from killing people in the present - although he seems less reluctant when dealing with those who have done wrong, such a criminals.[15] Even still, Yato can be a merciless person, showing great loyalty towards those he loves and cares for. He was angered when Hiyori was kidnapped to the point where he challenged Bishamon, believing she was the one responsible.[2] He was also devastated when Yukine sacrificed himself to save him during said fight.[16]