Noragami Wiki
Register
Don't have an account?
Sign In
Advertisement
in: About, God, Seven Gods of Fortune, World

The Seven Gods of Fortune (七福神 Shichi Fukujin), commonly referred to in English as the Seven Lucky Gods, are the seven gods of good fortune in Japanese mythology and folklore[1].

They are some of the most widely worshiped, prayed to, and wished upon Japanese gods in modern times, with figurines or masks of them being especially commonplace in small businesses.

As can be understood from the name, the group consists of seven gods, with each one being associated with some special abilities, attributes and/or guarding sphere(s) of people's everyday life:

Excluding Ebisu, six of the Seven Lucky Gods have originated in Indian and Chinese myths and folklore, and have later entered Japanese lore through Chinese influence starting from the 6th century AD.

The Seven Gods of Fortune are often depicted all together on a ship called Takarabune (宝船; lit. "Treasure Ship"), which, according to tradition, they ride to arrive in every town on New Year's Eve to distribute gifts to those who are worthy.

Kichijōten (吉祥天), goddess of happiness, fertility, and beauty based on the Hindu goddess Lakshmi, is sometimes found depicted among the Seven Lucky Gods. When she does appear as part of the group she replaces Jurōjin, whose attributes can be seen as included in those of Fukurokuju. She is mostly not included, however.

Being widely worshipped gods, the Seven Gods of Fortune are of a high standing in Takamagahara, with considerable influence, grand domains in the heavens, and presumably, many shinki.

When the gods are summoned for a meeting to discuss the threat of the mysterious "Sorcerer" who has the ability to control phantoms as if they were shinki - a process which is deduced to only be feasibly by a god as well as inflict him with much blight in the process - the Seven Gods of Fortune are labeled the main suspects under the claim that their massive following makes them capable of sustaining the immense blight that the process of naming a phantom causes. This claim is proven true as Ebisu indeed "named" a phantom and survived the process (although with deterioration in his health later). 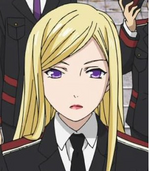