Start a Wiki
The Man in the Sweatsuit (ジャージのひと, Jyaaji no Hito) is the first chapter of the ノラガミ Noragami manga series written by Adachitoka. It was first released on 6th December, 2010.

It's the time of year where students are stressing about their exams. A pupil at the school, Mutsumi is suffering from bullying. She calls a help number written in a bathroom cubical. The number actually belongs to a god named Yato. Both him and his Regalia, Tomone, take up the job and help with the girl's troubles. These troubles are mainly caused by Phantoms. After completing the job, Tomone decided she wants to quit serving Yato, and so he releases her.

It's exam season and high-schooler, Mutsumi, a victim of bullying by her classmates is sitting in the school bathroom crying. On the vandalized walls of the cubical she notices a scrawled out telephone number, normally she wouldn't see the number but today is different.

She dials the number on her cell phone, oblivious to whom she's going to be speaking to or what she's going to say. The receiver seems excited to be getting a call and a second voice exclaims to address customers properly. Mutsumi asks if the person on the other end of the phone can help her and the person explains that she wouldn't be able to see his number unless she was in some sort of trouble and needs their help. Mutsumi begs for the person to help her then suddenly Yato and Tomone appear above the cubical; them being on the other end of the phone.

Mutsumi, seeming scared watches as Yato and Tomone converse between each other before Yato introduces himself as a god, to which Tomone quickly downgrades him. Yato briefly indulges in a personal fantasy of him being a well known, highly respected god with a lot of worshipers then quickly gets down to business about Mutsumi's problem. His first solution is eradicating the bullies but Tomone quickly objects to the idea, Mutsumi is quick to flee to the bathroom while they're briefly conversing.

Upon entering the classroom Mutsumi is greeted with insults and grief from her classmates, she takes the bullying and sits down in her seat with an upset look on her face. She notices a small bird-like creature sitting on her finger chirping at her and quickly freaks out; screaming loudly. Her classmates respond by insulting and gossiping more and the creature seems to have disappeared.

Mutsumi takes to crying in the bathroom again, only to be interrupted with Yato and Tomone arguing over Yato messing with school property. Yato asks Mutsumi why she's still crying and she explains about how the other students bully and ignore her while referring to herself in third person; much to Yato's annoyance. Yato and Tomone notice a monster in the bathroom which Mutsumi soon notices and freaks out over. 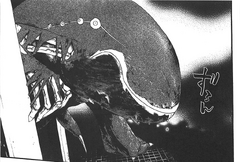 Yato explains that the monster preys on people's evil energy and wants to attack Mutsumi, the bird-like creature from earlier appears on her finger which causes her to flail and yell. Yato explains that these monsters aren't normally visible to humans but because Mutsumi has seen the death corner she is able to see these monsters, and his phone number as well. Yato explains that there are two dimensions, one where humans live and one where the monsters live, and there are people stuck in between like them. People who cannot accept death don't see the monsters, in the death corner a lot of evil spirits exist and even though they are invisible they are still around humans and possess them. It comes to light that the bird-like creature dwelling on Mutsumi is actually trying to protect her from the evil monster and that it was actually born from a wish she made. Mutsumi confesses she wishes to pass her exams, the bird tries to speak to her saying "don't give up".

Blessings and curses work identically to each other, if you wish for one hard enough it'll become real. The air around the school appears very cold due to it being exam season and all the students are currently stressed about it; Tomone alerts Yato who says a storm is coming. A large monster hovers around the school and Mutsumi freaks out again, however Yato doesn't seem too bothered by it. Tomone proposes that defeating the monster might stop the other students from bullying Mutsumi. Mutsumi begs Yato to kill the monster in hopes she'll be free of the other student's bullying, Yato then quickly asks for her to make a payment of money. Mutsumi confuses how much Yato wants from her, thinking it to be up to five hundred thousand when in fact it's a simple five yen coin he's asking for.

Yato leaps out of the window and calls Tomoki; Tomone's weapon name. Tomone then transforms into her Shinki weapon form and becomes a dagger which Yato uses to slay the monster. After a one sided battle between Yato, Tomone and the monster Mutsumi compliments Yato; much to his pleasure. Tomone asks Yato to turn her back and then is quick to complain about his sweaty palms. The three walk down the school hallways seeming relieved and Tomone assures Mutsumi that the bullying should now stop and Mutsumi happily returns to the classroom, as she's about to sit down the student's comments and horrible remarks continue as if nothing's changed; Yato and Tomone watch from outside.

The three are now conversing in the school's infirmary room, Mutsumi upset that she's still being bullied by her classmates; Yato is quick to give her the cold shoulder. Mutsumi declares that she wants to die which makes Tomone quickly take her side and try to reassure her, to no avail, however the bird-like creature continues to chirp on Mutsumi's shoulder. Yato kicks over an infirmary bed out of irritation and leaves with Tomone, the two argue over the situation until Tomone convinces Yato to do something about it.

Yato runs into Mutsumi shortly after in the hallway, he draws Tomoki and appears to attack Mutsumi with her but once the blow is struck Mutsumi is unscathed. Yato explains that he's severed her ties with her classmates and that she is now a stranger to them, he leaves with Tomone and says the rest is up to Mutsumi. Mutsumi returns to the classroom only to be told that her exam is rescheduled and it seems like the other students are no longer bullying her. Tomone complains about Yato severing her ties and the two enter another debate. After a short argument Tomone demands that she wants to quit and breaks down, Yato releases her and the Tomoki mark on her arm disappears. She quickly insults Yato and runs away while Mutsumi is coming to terms with nobody noticing her, it's not long though before one of the students who previously bullied her invites her to join in on a revision session after school.

Yato rests in the street holding a bottle of coins claiming he needs to find another divine weapon.

Characters in Order or Appearance

Retrieved from "https://noragami.fandom.com/wiki/Noragami_Chapter_01?oldid=17709"
Community content is available under CC-BY-SA unless otherwise noted.