This article is a stub. You can help Noragami Wiki by expanding it.

Ōkuninushi (, Ookuninushi), also known as Daikokuten () is one of the most well-known of the Seven Gods of Fortune. He is the god of nation-building, farming, business, medicine, and matchmaking.

Ōkuninushi has the appearance of a middle-aged man with white hair and a tan complexion. He has short, spiky blonde hair and a goatee, as well as a distinct tuft of chest hair that is usually visible through his clothing. Since he is always wearing a pair of aviator sunglasses, his eyes are completely obscured, though they have been shown once and appear very sharp.[citation needed]

Ōkuninushi's casual attire consists of a leather jacket worn over a loose shirt with a deep V-neck and dark pants. He has also worn a much simpler set of traditional clothing, consisting of a jinbei set (a kimono-like shirt and baggy short trousers) and a haori. Two accessories that Ōkuninushi always seems to wear are his sunglasses and a simple good luck charm tied around his neck with a string.

Ōkuninushi has a bold and caring personality. He's demonstrated that he has great loyalty, trust, and concern for his fellow Gods of Fortune, to the point that he would stand up to Heaven when they are questioned.[1][2] However, at times he is too afraid to act despite believing it the right thing to do.[3]

In the past, he was said to have caused many Near Shore earthquakes, but he currently seems unhappy with causing violence or large-scale destruction.[4] 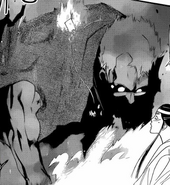 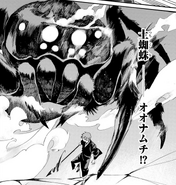